Ever since I learned about Spoon Theory, I have had a thing for spoons. I think this is because it gave me an image to latch on to that represented so much of what I was going through, and in the process, I have collected quite a number of spoons. 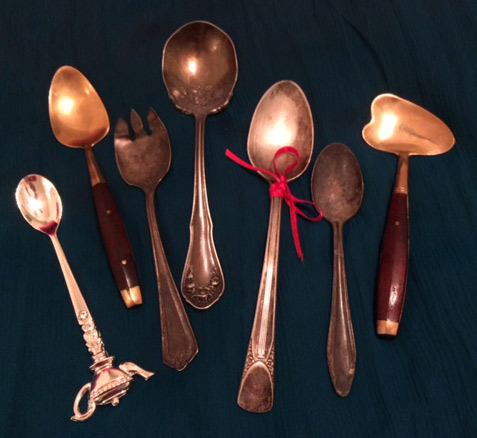 Most of these spoons sit in a special cup on my personal shrine at home. Because there is no discreet or easy way to carry spoons with me, I am forced to leave my spoons at home in their cup and go on with my day without them. It has always been my hope that I could find spoons that I could hang on a necklace, or put on a key chain or spoons that would be small enough to carry on my person. It just so happens that I finally found some.

My partner found a set of teapot spoons online, and decided to get them for me on a whim. They suit me in a lot of ways- I love tea and the rhinestone on the handle is really up my alley. And the best part about these spoons is that they are small and have a loop in the handle, which can be strung up on a necklace.

My original intent was to get some thin satin cording, however my attempts at finding a color that suited my needs was proving difficult. I could find a ton of rainbow colors, as well as a bunch of really boring, washed out colors. But there wasn’t anything that really worked for me.

In my despair, I meandered around the Micheal’s and tried find something else that would work for my needs. I came across this really nice “yarn” that I felt I could use. And I was in luck because it was on sale, and there were two sets of colors that suited the gods I worked with- the red reminding me of Set, and the blue cording reminded me waaaay too much of the River and Big O. I felt like it was a win-win for me all around. 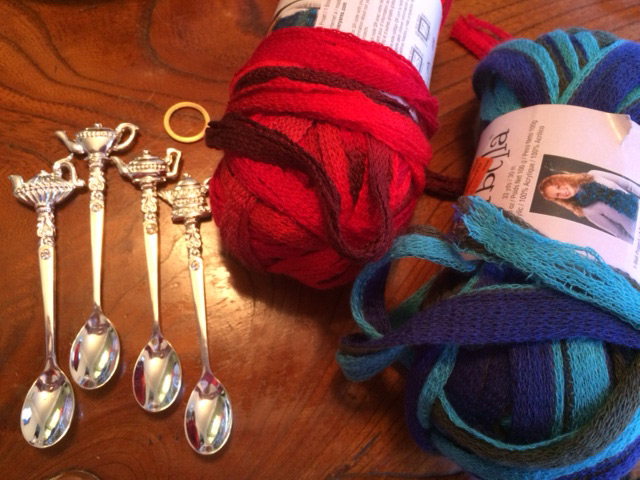 So I sat down with all of my supplies and decided what to do with the spoons. Due to the thickness of the cording, I could no longer string beads onto the necklace like I had originally hoped. However, I decided to play off of the netting that existed within this “yarn” and I worked with knots and numbers instead.

For the red cord, I chose to place two knots above the spoon. Two was a number of duality in ancient Egypt, and I have come to associate two with not only creation, but balance. Harkening back to balancing my two halves and making them whole, I can no longer look at the number two and not think about this. The same way that Ptah balances chaos and stability, I balance my work with Set and Osiris, and I balance my internal self with my external life. Balance is incredibly important to me, and so I felt that having two knots suited this need well.

The blue cording was a slightly different story, though. I decided to try and make a more complicated knot for this piece, which is perhaps a reflection on the complicated nature of mine and Osiris’ relationship. I opted to look online for something that would translate well into this thicker “yarn”, and I found this. And so I decided to give it a shot. After I created the more complicated knot, I added two smaller knots to either side of the main piece. The number 4 represented completeness and totality in ancient Egyptian symbolism, and I felt that I could use some completeness and stability in my self-care. This also mirrors Osiris himself, who is known to be the djed pillar- a beacon of stability and endurance.

Although the necklaces probably look more home made than some people would prefer, I liked the informality of each of these pieces. I also like that I could take the spoons off of the current cording, and switch them out for something else. So if I decided that I wanted to change the focus of the cord, I could either untie them, and redo them in a more suitable format. Or, I could destroy the current cording, and replace it with entirely new cording that suits my needs. Either way, there is a lot of flexibility in what I could do with these pieces, and I like that. 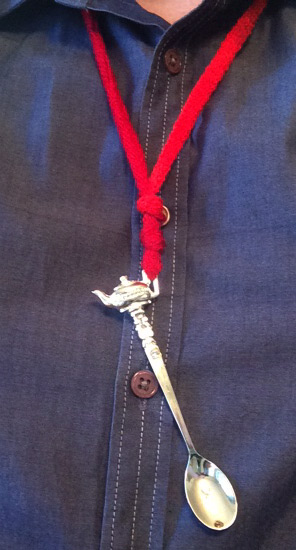 I am super happy that I can finally take a spoon with me to work or to family gatherings or what have you. It feels nice to be able to look down and see the cording, or to rub the spoon between my fingers when I’m stressed and know that I am not alone. And because the cording ties back to my gods, it’s another way to have them in my day to day life in a not-so-obvious way. I can’t wait to be able to take these spoons with me, and see how they influence my ability to cope with day to day life, as well as how many learning opportunities they will provide when someone asks me “Why are you wearing a spoon?”.

Have you ever performed any spoon heka? If so, how did you go about it?