How to Build a Heart: Carrying My Father

Father-Lover proved to be a surprisingly easy task.

When I first realized that I would need to still do work with his remnants, I was daunted. I expected to be overwhelmed by the emotions and trauma of our past, of his past. I spent weeks avoiding putting his stone into the heart jar where it needed to go. And then I spent weeks ignoring the fact that I needed to pull it out again. And then I spent days doing everything I could not to touch said stone, for fear of what would come rushing forth. Each step seemed to inch me ever closer to resolving the situation at hand, but each step also evoked the deep-seated fear I ultimately have of the man that I once called father.

It was early morning, and we were having tea at the table. I found myself staring at Father-Lover’s stone as it rested on the table. There was a pull in me, a desire to touch it, but the desire was always tempered by fear. But because I had enough substances rolling through my veins, I guess I was in enough of a mind space to ignore my baser fears, and I found myself flipping the stone between my fingers, rolling through black fabric in my mind’s eye as I floated forward towards some unforeseen ending to the tunnel that the stone was pulling me down.

This was the first time in years since the stone had anything active in it. While it had always continued to carry its feeling with it, touching it up and to this point hadn’t rendered anything of note. But now? Now I was going somewhere.

I sat there for a while, waiting to reach my destination, and when my feet finally hit the closest thing I can consider ground, I saw that someone was sitting there waiting for me. I’m sure everyone can infer that it was Father-Lover sitting there in the backlit darkness, waiting for me to find him. However, he felt nothing like the versions I had been forced to interact with all of these years. In this crystallized moment, he was so close to who I had always been told he was, but had never gotten to witness on my own.

With his form as I knew it removed, it barely felt like Father-Lover. For a brief moment, I could look past the trauma, the hell we had been through together. For a moment, there was the tiniest possibility of healing. You could see it in his eyes, the sorrow, the unfairness of it all. In this section, he was neither Father-Lover, nor his predecessor. He was somewhere in between.

Of course, this place was not to last. Like so many other healings I have worked on, once the person in question gets what they need, the blockage is removed and everything starts to flow again. The problem being that flow usually means a lack of direct access like this, and so I was no longer able to find him again. All in all, I had less than an hour to soak in the emotions before I had to let go again.

But at least I could handle the stone freely, and I was no longer afraid of its contents. Though the trauma of Father-Lover still exists, I no longer seemed to fear that he would show up and wreck my life again.

And as soon as I had finished that bit of work, the next bit rolled in. And this time, it was my old pendant that I used to wear to represent Set and O as a sort of singular unit. My Ptah pendant that has skeeved me out so badly that I’ve barely touched it in years. It’s spent a lot of its time living in my heart jar, where I could forget that it exists. Every time when I would go to check the contents of said jar, a small part of me would be like, “Oh yes, this is a thing that exists, I forgot.” but I never felt inclined to pull it out or wear it. And as the years have progressed and my love of the religion and its gods has waned, my desire to wear the pendant has diminished greatly.

By the time that Someone was trying to convince me to bring it out and work with it, I didn’t want to touch it at all.

I have toyed for months now as to whether I should be opening up about it or not. Truth be told, most of the times I mentioned my growing issues or complications with the NTRW, I ended up with people either telling me its my fault for things being as they are, or to quit complaining, and so I’ve mostly been keeping it to myself. But when they made me pull the pendant out, and then made me wear the thing, it became much harder to ignore, and has since been very hard to ignore.

For whatever reason, I was inclined to hang it on two different strands of yarn, which you may recognize from this old post. And then I wore it for a few days until the feelings about the pendant itself started to float away. So I can touch it now without feeling completely put off, but I still don’t want to wear it. 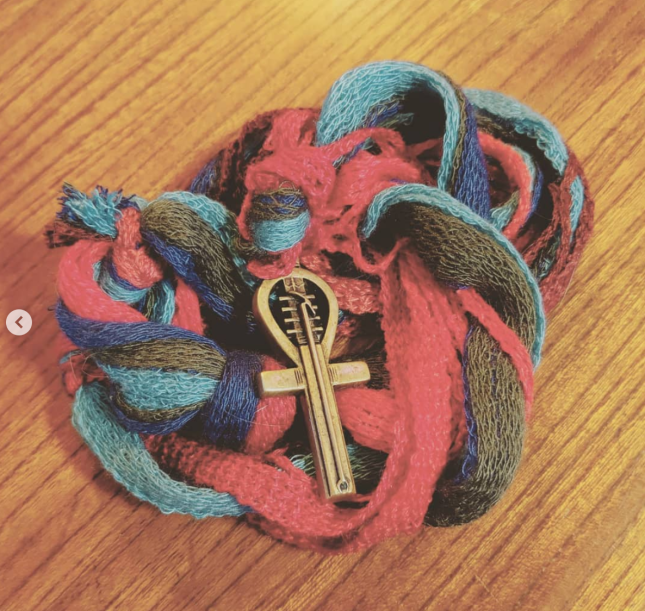 Throughout this time, I received a handful of visions or experiences, and one of the most notable things that occurred during this time is that  the nerve damage that is present in my physical body began to show up as a sort of scarring on my skin in the astral. It’s not something I’ve had happen very often, and I’m not sure what working on these two items might have done to cause it to occur, but here we are.

Slowly, I’ve also noticed that I am sorta being dragged away from using my heart jar shrine as a sort of living shrine, and have instead been encouraged to co-opt a pre-existing setup that was in another part of my room. It’s left me wondering if the jar is meant to be temporary and not permanent, and honestly, I’ve always had this nagging question in the back of my head as to whether a heart jar would be a permanent fixture in a person’s self care, or if its something you only need during times of healing.

As this progressed, I began to question if maybe I should scrap my entire heart jar heka idea all together (though I am still using aspects of the shrine, albeit, sparsely), not to mention the slowly-rising anxiety about how I’d even begin to put into words what I was experiencing. It can’t be ignored that this series is now six posts deep, and I have no clue how much closer I even am to finishing this project, much less if this will ever reach any sort of logical conclusion. It has led me to feeling like the work will never be done, or that the hope of being healed is some sort of unattainable dream. It’s why I don’t usually write about a project until after its done, because if I can’t wrap it up in a pretty, edible package for everyone, then it usually never sees the light of day. But now that this is out in the daylight, it also feels weird to not write about its progress.

I guess if it does say anything about rebuilding your heart, its that the process is long, messy, and rarely feels productive.

Previous posts in this series, for those who lost count:

4 responses to “How to Build a Heart: Carrying My Father”