Almost everyone that I know has spent at least some time living with people who don’t appreciate or understand any religious practices outside of Christianity. And with today’s economy being what it is, it’s more and more common that many of us have to rely upon others for financial assistance and living arrangements. However, just because you moved back in with your parents doesn’t mean that things quit happening, and you can just turn off all of your religious practices or that spiritual crises can’t still happen. It’s not like some angry spirit gives a care about where you’re living, or the fact that you can’t burn incense while in your parent’s house.

So what is one to do?

The short answer is to get creative! There are many ways that you can protect yourself and perform simple forms of magix while living under someone’s roof. To really grok ninja magix, you will need to really get and understand the core concepts of magix- what makes something work or tick, so that you can deconstruct it to it’s most basic components. You then take these components and alter them so that they can be done discreetly.

To better illustrate my point, let’s take a look at a few examples of magix that are right out in the open for everyone to see.

Take a look at this wall hanging. It doesn’t look like anything special. I got this coin from my therapist actually. When she moved offices, she let a lot of her clients take stuff home that she no longer needed. I thought nothing of the coin- it fit in with her Asian decor and it all made sense to me. But then I got home, and I took a look at the back of it, and this is what I found: 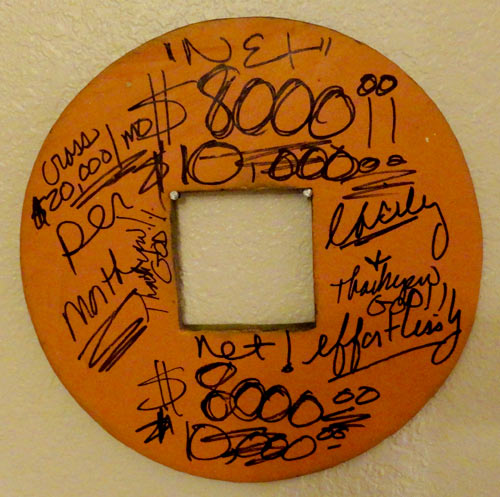 That, my friends, is magix. She might not call it magix, but that’s what it is. It’s financial magix to be more specific. Take a look around the home you’re in- are there things on the wall? Could there be things on the wall that you could hide magix on the back of? Get creative! You don’t always need to write directly on the back of something to make magix work.

For example, I have this IKEA frame by my front door- it contains cards that me and SO have exchanged. Inside each of these cards contains love magix and happy home magix. 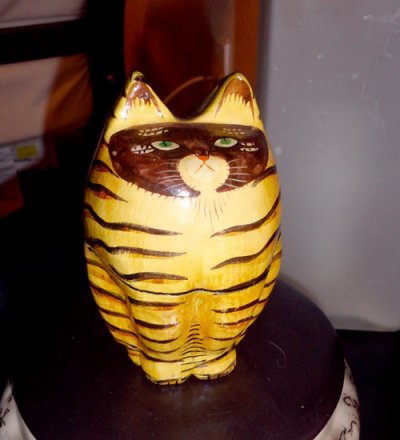 Or how about this for magix: I have a hollow cat that my mother gave me many years ago. It looks pretty non-descript, especially considering my crazy-cat-items fetish. However, when you open it up…

Yet, if I would have never told you about these things, no one would ever be the wiser 🙂 Here are some more examples:

In Feng Shui, it’s good to have bells on the front door, in numbers of 3 or 5 (odds = luckier). These bells help to bring good chi (energy) into the house. When I lived at my mother’s house, I asked to put bells on the door. I didn’t tell her it was for magix, I told her it was because I would like to know when people enter the house- she agreed, as she is paranoid about breaking and entering. She actually still has the bells on her door, despite my moving away.

If you would like to have protection outside of your house, or at your doorway, but don’t want people to see it or know about it, try using your welcome mat as a means to protect. You could easily write sigils or protective seals on the bottom of your mat. If you want to be even more secret, you could write it in a market of the same color as your mat (for my house, that would be black) and then it will be even harder to see.

You could even put protective items or markings on the bottom of furniture pieces (chairs, tables, desks, etc). Even places like a fish tank or toilet tank could contain protective items (no joke, I moved into an apartment once with a cross in the toilet tank).

That’s all good an well for items that are around your house- things you can leave out. But what about things like cleansings? You have to cleanse regularly, and you would stick out quite a bit walking around with a smudge stick- so what do you do?

These types of situations can be difficult, but they can be worked around. Here are some ideas about how to cleanse while out in the open:

And lastly, I’d like to cover concepts and ideas that you could even work on your own person. We often forget that our own bodies can be vehicles for magix- but there is a lot of potential for body based magix that is hidden in plain sight. Here are some basic ideas:

These are just a few ideas to get your brain thinking about ways you can perform magix while in plain sight. The more you work with the concepts I’ve laid out in previous magix posts and the better you get with focus and visualizing, the easier it’ll be to perform magix in any setting- with minimal tools. The more you experiment, the easier it will be to get creative in the application of magix to every day items and situations!

Other topics in the Devo Magix Series:

Posted by DevoTTR on August 20, 2012 in Devo Magix Series