In a World Full of Yes

Deciding to finally live for myself couldn’t have been more timely. I knew within a matter of days that the situation I found myself in earlier this year would have done 2016-era me in completely. This is largely because I was suddenly finding myself dealing with my family on a daily basis in ways that I hadn’t had to in the past. I never had to get into it with an aunt about finances or with an uncle about caring for their elderly father.

As the weeks dragged on, I found that most of my family hadn’t changed much from my youth, and that most of them were just as shifty in their behavior as they had always been. With each new round of drama that would crop up, I found myself having to choose between keeping the peace and actually protecting myself. In my youth all I had ever done was work to keep the peace. I chose to make myself smaller so that I might not get ousted from the group, and what I didn’t realize when I decided I was going to go “all in” with life is that you can’t really take the path of least resistance when you’re actually trying to take care of yourself.

With each new experience where I felt like someone was taking advantage of me or trying to hurt me, I could suddenly see my younger self looking back at me, asking me why I was allowing this person to hurt us, to hurt them. I noticed that I was always more willing to put myself in the line of fire for others, but not for myself; a well-known trait for those of us with anxiety. Which meant that if I wanted to walk the walk and not just talk the talk, I’d have to start sticking up for myself in the same way that I would for others, and drawing boundaries in the sand as to how I would allow people to treat me.

For someone like me, this is actually quite terrifying.

Of course, when I talked with my therapist about boundaries, some part of me knew that this was going to happen eventually. She told me that I wasn’t very good at drawing boundaries to keep myself safe. She said that this was partially what caused the violent emotional responses that I was prone to. Because I couldn’t separate myself from everyone around me, I couldn’t help but feel their feelings as though they were mine. I almost felt like I wasn’t being a good person if I wasn’t flinging myself headlong into everyone else’s issues so that I’d know what it felt like to be them in that moment.

And in those moments, I seemed to imagine that drawing boundaries would be empowering. That I’d basically be learning how to cordon myself off from things that would hurt me. That I’d make sure I was safe. I think that my initial concepts of drawing boundaries banked on the notion that I’d be able to actually disengage with anything I didn’t want near me. Which, in its own way, means I was planning on drawing my boundaries by running away.

But what if running away isn’t possible? As is the case when you’re being a caretaker for someone who still has living family that they want in their life. I hadn’t thought about this until I was already in it. You see, for all of the years of being labeled as being aggressive, mean, bitchy, overbearing, etc. I actually do not get off on telling people what to do. I feel uncomfortable asking for simple, basic things, and when I have to do so regularly, it can cause me to have anxiety attacks. But in order to actually protect what I had managed to cultivate, I had to find a way to tell people — family — no.

And so I tried. At first I often would try to soften anything I said. “Could you maybe, possibly think about how that might have come across. It was kind of mean.” or “I’m not really comfortable with that, would it be possible to maybe do something else?” And you know what happened? 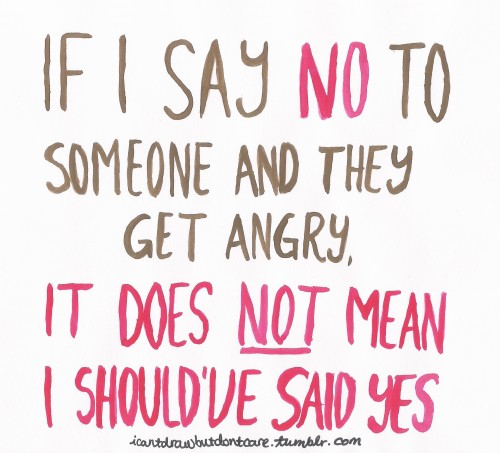 [[image of quote that says “If I say no to someone and they get angry, it does NOT mean I should’ve said yes”]]

If there is anything that 2018 has taught me, it’s that you can be as accommodating as humanly possible. As nice as humanly possible. As non-intrusive as you can possibly be. And people who are committed to not meeting you halfway will still call you Too Much, Extra, and my personal favorite, Bitchy. People who are not interested in developing healthy relationships with you will never acknowledge or respect your boundaries without a fight, and that doesn’t mean you shouldn’t have set those boundaries.

Above all, I’ve learned that setting boundaries feels less like taking care of yourself and more like fighting a war against people who won’t take no for an answer. The problem being that as awful as fighting a war everyday is, fighting this war is necessary, if not mandatory in order to be healthy. The more I found myself not defining what was okay in terms of how people treated me, the more I found myself not saying no, not standing up and speaking my needs, the more miserable I became.

So it begs to ask — which is worse? A slow death by suffocation via those around me because I was too scared to stand up and say no? Or a slowly-fought battle where I potentially lose people, but can ultimately breathe?

[[image of a quote “It is crucial for deeper level recovery that we learn that feelings of fear, shame and guilt are sometimes signs that we have said or done the right thing.They are emotional flashbacks to how we were traumatized for trying to claim normal human privileges.”Complex PTSD: From Surviving to Thriving, Pete walker, pg 78”]]

In Kemeticism, we talk about how isfet has to be battled back every day. The gods have no choice but to engage in this daily battle, or be destroyed by the thing they fight. Every time I’ve talked to the NTRW about fighting back isfet, they don’t seem to be too distraught over it. It’s just a thing that they Have To Do if they want to live a certain quality of life, and there is very little baggage tied to it at this point.

As I continue to work on drawing boundaries for myself, I begin to think more about this comparison, and how if I allow other people to constantly take advantage of me, how my life will be overrun with isfet. How I can’t, in good conscience, tell myself that I’m trying to live in ma’at while not actively trying to dispel the isfet I’ve inadvertently let in my life. I remind myself that anything worth having is worth fighting for, and if I’m not worth fighting for, then what is?

And so the battle continues. May it get easier to do, and feel less like a battle in time. For all of us.