Disclaimer: this post discusses the legal usage of medical marijuana (MMJ). If you have any problems with this, please use your discretion in reading this post. All comments will be heavily moderated.

This whole adventure started with a Facebook post. It was late January and I was still bleeding my wounds from the Mysteries and I really really really needed a break. I was venting on my wall about how I really wanted to be able to find a way to zonk my brain out for a few weeks straight as a means to get my anxiety and depression under control. And out of the blue, my uncle posts on my wall that I should get some cannabis.

Yep. My 50 year old republican uncle had suggested I get myself some pot. I don’t even think he was talking about legally getting pot, either. Different strokes for different folks, I guess.

But as it turns out, my state is a legal state for medical marijuana (MMJ) and after talking with a friend of mine who has an MMJ card, I figured I’d give it a shot. 18 years of having chronic pain in my shoulder was more than enough to get me a card, and I figured that it couldn’t hurt to see how it would effect not only my pain, but my mental health as well.

I decided to document some of the things I had learned about my anxiety while trying to address it through self-care and MMJ use, and post it for others to consider. It is my hope that some of my experiences may help others to better understand their own anxiety, and possibly find ways to ease the anxiety in their life. This will be an ongoing series as I move forward and learn more about my anxiety and depression. 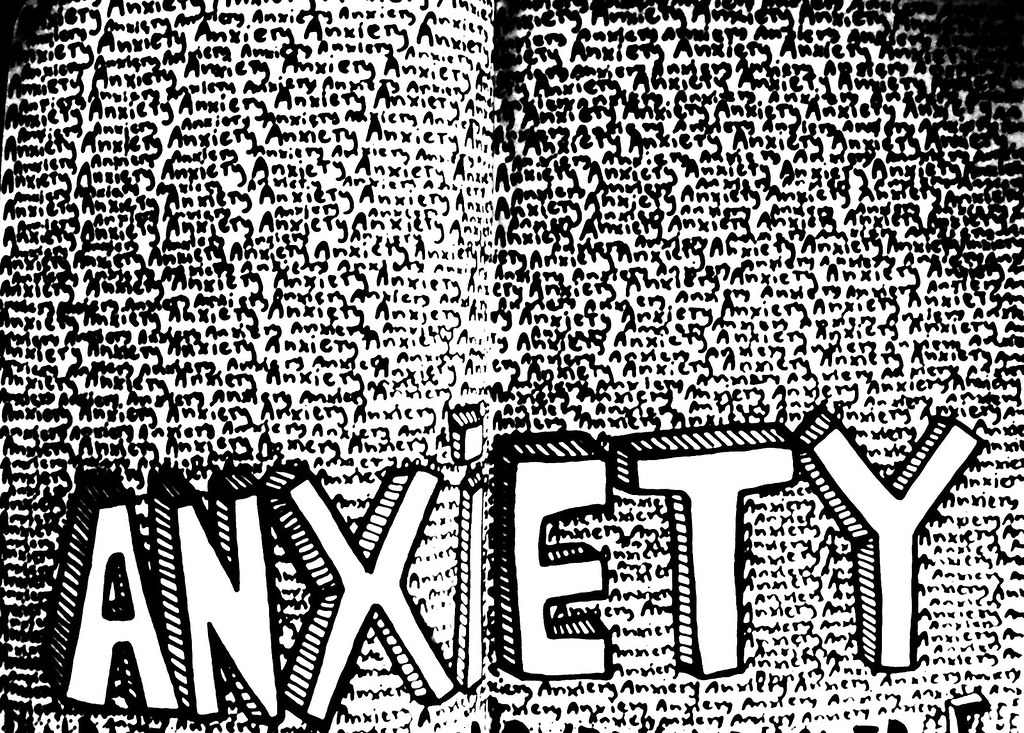 Lesson One: Anxiety is a Learned Pattern

The first night that I decided to try smoking I just so happened to decide to sit down and talk with Set and Osiris. It was one of my first discussions with them after having returned from the Mysteries, and I was dieing to get some answers out of them. We met in one of the larger halls at O’s place, and they sat there patiently while I tried to get my brain together. The conversation was less difficult than it had been in recent months. I was able to sit there calmly and listen to what they had to say and I wasn’t breaking down due to the words being exchanged. But part way through the conversation, a weird thing happened- someone had said something that would have normally caused an emotional response. And as soon as I heard what was said, I went to grab at my hair (a thing I do when stressed) and prepared to freak out and cry.

But then I realized nothing was happening.

My body was so used to having anxiety attacks that I instantly moved into that place without even thinking about it. It’s kinda like in cartoons when someone thinks they’re drowning, and they flail around only to find out they’re in about 3 feet of water? It’s kinda like that.

I felt incredibly stupid but I was incredibly surprised to find this out. It makes enough sense when you think about it- almost everything you do is a learned pattern- from how you get dressed to how you wash your hair. However, I never really thought about how my brain had dug these patterns into my skull in terms of anxiety- and what that might look like when the connection was interrupted.

One of the first things I noticed after I began to work with MMJ (through smoking and edibles, in case you’re wondering) is that I was hella angry. Like o.m.g. angry. My MMJ friend had told me that pot makes her not care about things as much. In the sense that she doesn’t worry about things that don’t really matter. I found out, however, that addressing the anxiety meant I didn’t care…. about what anyone else thought. I noticed that my interactions became shorter online. I had phases where I literally wanted to scream at people in all caps and tell them how stupid they were/are. I wanted to tell everyone off and tell everyone where to shove it, and due to whatever I was doing to my brain chemistry- I didn’t care at all about the consequences of such an outburst.

It was not pretty.

I reached out to some people online to see what on earth could cause this. Another person who works in psychology told me that many times when you begin to work on things like depression and anxiety, one of the first emotions to come bubbling to the surface is anger. And upon re-reading Hyperbole and a Half’s depression post I realized that she, too, became angry upon working with her mental health.

So if you decide you want to work on your depression and/or anxiety, be prepared to be angry. Really angry. Be prepared to take a lot of time away from people and the internet, and be prepared to potentially stick your foot in your mouth a few times.

The first few weeks that I was using MMJ, I felt soooooo much better mentally. I felt calmer. I felt like I wasn’t dieing all the time. I felt better.

But that didn’t last very long. Within a month I was in the anger streak I mentioned above, and I was so tired from all of the MMJ that I could barely bother to sit online and write anything. My ability to write blog posts plummeted and I plowed through my entire drafts bin during that time. I felt like I had gone from ‘on the mend’ to ‘completely fucked’. I lamented that I couldn’t function this way. I wouldn’t be able to do the Kemetic thing if I couldn’t keep up the pace with my writing. I worried that I’d become a failure and have to choose between having sanity and peace of mind or my community thing. I worried to the point that I went into another depressive state.

And it went like that off and on for quite a while. Depression still happened. Anxiety still happened. I had days that were good and I had days that were bad. However, the more I got used to the MMJ, the easier it was to function while under its influences. I found that my anger was less and less, and that I could slowly start to write more and more even while high. My pain was going down and my sleep was more restful. I found that there were some good things happening- I just couldn’t expect them to happen over night.

I would imagine this is the case for anyone who is working on, well, anything. Don’t expect a straight line. You’ll likely have ups and downs and set backs as you try to move forward. Don’t give up even if it seems pointless from time to time (which I had many of those moments over the past 6 months).

Lesson Four: Sometimes You Don’t Notice When You’re Getting Better

I have spent a lot of my time during this whole thing questioning if I was actually making any progress. There is a rather hefty financial requirement to use MMJ regularly, and I didn’t want to be wasting my money if it wasn’t actually improving anything. However, just because my brain still feels like it’s always messed up doesn’t mean that everyone else does.

One of the first indications I got that the MMJ was doing its job occurred when I was working at my company’s largest convention of the year. One of my coworkers that works out of the office asked if I was on sedatives. I was so de-stressed compared to normal (to him) that he thought I was on something that made me calm down (he was partially right).

I sometimes think it’s like losing weight. You see yourself every day, and you often times don’t think you’re actually losing the weight because the shift is so gradual that the daily looks in the mirror hide what is actually going on. However, people who don’t see you all the time certainly notice- and that seems to be how it is with this. I’m neck deep in my own thoughts and problems that I don’t even realize when I’m actually doing better day to day.

I even recently sat down with my SO to discuss whether the MMJ was posing any benefit for me, and he agreed that there were beneficial changes in me- I just don’t seem to see them yet. I’ve become calmer, easier to talk to, more open with my speech, and my meltdowns are less frequent and less potent in strength. To him, the change in attitude and demeanor has been significant, even if I don’t really see it yet.

Mind you, that is not to say that I haven’t seen at least some changes, but I guess I was hoping for night and day shifts and I think that’s probably unrealistic. So anyone out there that is looking to address their anxiety should probably find some other people they trust to help gauge their improvement. Find people who can be honest with you and tell you where you’re at. Having objective input can help you figure out if your methods are working or not. I also recommend keeping a journal of where you’re at mentally each day so that you can look back over time and notice any potential patterns. Being able to confirm that you are making progress can be the difference between sticking it out and succeeding, or giving up and failing.

I think this has been the hardest lesson for me to learn, and I’m still struggling with it. I learned quickly that if I really wanted to work on my anxiety, I needed to be prepared to give up other things that were important to me, and to focus purely on myself. That meant giving up working on things all the time. That meant spending more time performing self-care. That mean doing Unseen work less often. That meant sometimes spending more time doing absolutely nothing in the name of healing.

I think it’s a challenge for us to let go and do nothing but rest for a while. I know that I often felt like a failure when I couldn’t bring myself to write or paint or do anything. However, it is a necessary part of the healing process. You can’t run full steam ahead all the time and expect to heal. You simply can’t. So anyone who is considering working on such things, be prepared to cut some stuff out of your life for a while until you get a better footing with your health.

I am only getting started with the healing process, and I imagine that there will still be more to learn and more to discover about what it takes to get a better handle on my mental health. Despite some of the setbacks I have experienced during this process, I think it has been well worth the effort, and look forward to seeing where it leads me in the future.