Today, the Tsubaki GSA is celebrating the Great Mid-Year Purification or the Nagoshi-no-O-harai. This event is usually held in the 6th month, and it corresponds with the last day of the 6th lunar month and the protection and purification needed to get through the second half of the year.

As with all rites in Shinto, there is a heavy emphasis on purification and clearing out tsumi, or impurities, and this is done with katashiro and the chi-no-wa.

Katashiro take different forms, but typically, they are little paper people. You take these pieces of paper, and you rub them all over your person. In so doing, you soak up all impurities and negativity. To finish it, you breath out a long breath to get rid of impurities inside and out. After this is done, the Head Priest takes all of the katashiro from all of the Shrine members, and throws them into water to be purified. The source of water is different for each shrine. For Tsubaki, it’s a river. In other places (as stated in A Year in the Life of a Shinto Shrine) it could be a small pond or font of water.

Walking through the chi-no-wa is usually done last. I’ve seen a couple of different stories as to the origin of the grass circle. In the book mentioned above, the story goes:

It was a hot day in summer during the rainy season and a traveler was passing the last two farmhouses before the trail lef into the mountains. Being late, he stopped at the first and politely asked for a night’s lidging but was rudely refused. As the second house, however, they kindly took him in and treated him well. As thanks the next morning, he revealed himself as a Kami and foretold of an epidemic soon to come. “But don’t fear,” he told the terrified farmer and his family, “if you make a ring out of the long-stemmed grasses growing near your house and put it above your door, you’ll all be spared.” And so it came to pass.

As per Barrish-sensei, the story goes:

In the Mid-Year ceremony, all of the participants walk through the Chi-no-Wa. In the book mentioned above, everyone makes a figure-8. For Tsubaki, you will walk through it 3 times (I have never been to this festival, so it’s possible they walk in a figure-8 as well). Walking through the chi-no-wa will bring you health and harmony for the rest of the year.

I have yet to actually make it to a Mid-Year purification, but Tsubaki Jinja has made it possible for us long distance members to participate in the rite. We are all sent out own katashiro in advance, and we take them and rub them over our persons to soak up negative energies. I was a little rough with mine- and nearly bent the arms completely off of the little paper person. We then sent out katashiro back to the Shrine, and they will be cast into the river today.

For our own personal purification, today will be busied with cleaning the house and clearing our minds for the future ahead. Usually, there would be special offerings for the Kami, but I currently don’t know what to offer them. With my current limitations in diet, I can’t offer any juices or alcohols… so instead, I decided to give the birds outside extra seed (I feed the birds at the behest of the Kami). Beyond that, it will be a day of rest and mindfulness about the rest of the year to come.

What do you wish to see in the next 6 months?

Some videos on it:

The Color of Mourning

I’m not really sure why I’m posting this. It keeps bugging me, so I’m getting out of my system in an effort to make it stop bugging me.

There is a place that exists in my mind that I often times visit. I lovingly call it the Interior. It is something I either created, or stumbled upon during my college years, when I didn’t really have a path that I subscribed to. It came about during a time of heavy warding and barrier creation, and I needed a place in my mind where I could visualize my barriers being constructed. Even now, I still go into the recesses of my mind to explore the Interior, to see what secrets she holds. And sometimes I go there to get away from problems. To reconnect with myself, and sometimes the gods.

Throughout the past 6 or 7 years of working with the Interior, there are a few things that have stayed the same. The general layout of the place is the same as it was then. The weather is almost always the same (overcast during the day, gigantic full moon at night). And so is my appearance. When I first started working on the Interior, I wore a black robe or cloak of some kind. And slowly, the cloak disappeared more and more, and a black kimono replaced it. At the time, I didn’t really note anything of it. It’s a kimono, right? Nothing new there. I like Japan, no big deal. Must be bleed through. But then I began to learn more and more about wafuku and it’s styles. And I realized I was wearing mofuku. Clothes for those in mourning.

Mofuku is easy to spot because you are literally wearing nothing but black (except the juban collar, normally). Even items that you don’t see are black. Black black black. And the only thing I was missing on my clothes on the Interior are the crests. As far as I know, I had no crests (the white dots you see). However, rain or shine. Summer, winter, whenever. I was in black. Black wafuku. Sometimes the kimono would hit my ankles, other days it was shorter- closer to my knees. But always black. The only color I ever had to my name (on a regular basis) was on a pair of tekko- of a purple-ish color. For many years, I was not without my arm guards (look at Miroku’s to get a good idea).

Now that I’ve learned more about kimono, and the nuances of what the patterns and cuts mean, I really wonder what on earth I’m doing wearing mourning wear all the time. Yes, I can go in there and forcibly change what I’m wearing, but it always defaults to this black. Is it a past life me, running around being all sad? Is it a reflection of something within myself- that I’m mourning all the time? Is it just a coincidence?

The more I’ve learned about how to wear all of these items, the clearer the clothes become. Originally, I had a hard time figuring out what was around my waist. I knew something was there, but I couldn’t figure out the details. Now that I know how that stuff goes on and appears, I can see it more. However, the black on black on black came around before I knew jack about kimono, or how it’s worn. And even during the era of my ‘cloak’, I was still always in black. Why this necessity of black? It really does confuse me, as I am not a wearer of black. I think I own 3 black items in my entire wardrobe.

To make matters even more confusing, there is another form of clothing that I’ve started to wear (in the past 2 years) that shows up when I’m actually around something dead. And it’s not black. It’s light pink. And the clothing is typical of a younger female. Talk about confusing.

Brain, Y U NO make sense? 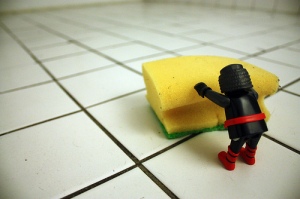 As I understand it, it is a common practice in Japanese culture to clean your house from top to bottom for New Years. Doing so more or less clears your slate for the upcoming year. It allows you to have good things come to you in the new year- because all of the crap has been cleared away.

I love this concept. I use it as a part of my Shinto practice, as I feel it’s focus on cleanliness and returning to a pure/clean state (such as Zep Tepi in Kemeticism) really mirrors the whole concept of The Great Clean. And after the Great Clean of 2010, I felt that I had cleared some of the drama from my life. I felt that it played a role in restoring some order in my life. That it cleared some chaos and stagnation away and allowed me to move forward to where I am now.

So this past weekend commenced the Great Clean of 2011. Due to being busy, we have broken up the Great Clean into multiple weekends. Each weekend we’ll pick certain areas of our house, or certain tasks to do. And hopefully, by the time Jan 1 hits, the house will be completely clean and ready for the new year. This past weekend we worked on cleaning out the kitchen. Getting rid of items we no longer need or use and taking them to the Goodwill (and actually, you know, taking them there. Not just leaving them in a pile by the door). We also got to work trying to sell our futon, which has been waiting to be sold since the beginning of Nov.

We also made the decision this past weekend that we will be making our own Kagami Mochi this year. Our normal place for buying it doesn’t seem to be carrying them this year. And at this rate, SAL wouldn’t get here in time. So we shall attempt to make our own. This will be the first year where we have an actual ofuda in the Kamidana- so I think it’s fitting that they get real Kagami Mochi, not a fake plastic one. Hopefully it will turn out well :3 I also need to get the Kamidana and it’s shelf all set up and ready for New Year and it’s ofuda. Which should be an adventure in and of itself.

Looks like I’ve got a lot to do before New Years hits.

Posted by DevoTTR on December 6, 2011 in Shintoism