Last weekend I got to participate in a local event called the “All Souls Procession”. It’s a play off of Dia de Los Muertos (Day of the Dead), which is a big deal down here in the southwest. The idea came from an artist who was coping with loss of a loved one- and it exploded into this huge thing (as I understand it). People come from all over to join in this procession- walking with hundreds (thousands) of others to remember those who have gone before us.

I joined in with a local taiko group who treats the event very similarly to Obon- a Japanese festival which also happens to honor your dead. Very similarly to Dia de Los Muertos (and Feast of the Beautiful Valley), Obon is characterized by visiting graves of those who have passed and sharing a meal with said people. It is also characterized by dancing- which is what this group does in the procession.

Besides the procession itself, I think the most important part of this festival is the burning of the Urn. Every participant is asked to print out and fill out a Prayer Form. This form will then be put into a huge urn which is burned at the end of the evening. Everything that you were doing led up to this point- the burning of the urn. The letting go of whatever you had put onto the form. Letting go of the past.

To prepare for this, I printed out my form a week in advance. I placed it on my altar (heh) and let Set and Asar stand on it. Giving it their awesome ju-ju. I placed my Obon towel on the form- hoping that maybe something would click for me (I seriously didn’t know what to write). The night before the procession, I offered the gods fake wine, hot tea and cupcakes (which Set is reputed to like). I sat there and looked at my paper- trying to figure out what to write. I’ve had a lot happen lately, and there are a lot of things I want to let go of. With that, there are a lot of things that I want to celebrate and am looking forward to. I’m a very mixed person right now. Eventually, after a lot of thinking, I figured out what to write on the form. I folded it up high school note style and left it at the feet of my gods.

The day of the procession was hectic. I was hoping things would have gone smoother, that I would feel this awe 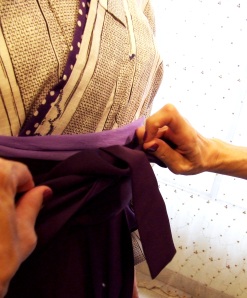 inspiring magic of it all. But really? It didn’t happen. I was rushed, tired, and running on next to nothing. After walking the procession, I was even more tired and low on food options. It was freezing and all I wanted to do was curl up in a nice warm bed. However, this made me think about the recently popular topic of trial work and pain in ritual. Shouldn’t letting go involve some work? Perhaps be a bit uncomfortable? Is there anything really wrong with that? I mean, I am asking the gods to help me unload a bunch of crap off of my chest- the least I can do is keep my chin up while going through the process.

Walking the procession was interesting. There were people who were jerks, there were people who were really awesome. There we a couple of people who started to learn the dance and would dance with us- which is the way Obon should be. In that regard, it was awesome. During the procession, there are two parts where you walk through underpasses. In these sections, people scream and holler. It’s absolutely deafening- but for me, it was the best part. The energy, you couldn’t escape it.

At the end of the night, I was tired and grumpy. I seriously questioned why I would want to do this- freeze my butt off and walk all this way just to watch a big ball of flames. But I told myself to give it time and that perhaps in time things would be better and I would understand more about why I did this. I think that has happened. Since burning my paper (which was so full of energy I could barely touch it) I have finally decided that I need to get my health in order. I’ve worked on a list of priorities for things I need to get done. I feel like things are moving, however slowly, and that somehow burning my paper really did help me.

All in all, I do think that this was a good experience. I learned that I will be doing things a little differently next year, but the fact that I say “next year” says something, I think. I want to continue this, I want to make this a part of my yearly ritual calendar, and I want to be a part of something larger than me. I can’t wait to walk next year.

Posted by DevoTTR on November 10, 2011 in Kemeticism, Shintoism