A few weeks ago I was getting ready for my shower when I suddenly got this memo that went something like “don’t forget that you need to be preparing for the Mysteries this year.” It struck me as odd, since I haven’t really done anything for the Year of Rites since October, and for the NTRW to not harp me on that, but instead decide I needed to perform the Mysteries really seemed out of character.

I asked the “memo” what I needed to focus on for the Mysteries, and I received one line, it said “Glorify your father.”

In the matter of a few seconds, my brain raced in several directions with this. First off, the word father really seemed highlighted to me, and there are two reasons for that. First is the mythological component. Osiris’ myths are frequently centered on Horus and his quest to avenge his father and take back what’s his. Second, you’ve got the historical context in that every Osiris relies on his eldest son to give him a proper funeral and to maintain his cult to at least some degree. Both of these aspects would place me in the role of Horus glorifying my father, and have fairly straight-forward heka connotations.

But what really caught me was the third place my brain went.

While I understand that the NTRW can use familial terms for some people, it’s never been the case for me. Further, if there was a NTR out there that I would use familial terms with, it certainly isn’t Osiris. But there is another person that frequently gets labeled specifically as father (as opposed to “dad” or some other similar label, it’s always father) and that would be good ol’ Father-Lover. Would I need to incorporate aspects of my rebirth/rebuilding process into this? Or perhaps more accurately — had the NTRW decided to insert themselves into my process without letting me know? I wasn’t pleased with the idea.

Between all of these concepts, though, there is one vein of similarities: you become your father.

Ultimately, the reason Osiris gets it on with Aset is largely to make sure that he continues on through his son. Ultimately, the son and father overlap and become one mythologically speaking (hence Bull of His Mother) and so in some respects, I would argue that you could potentially interchange the two to some extent. And when it comes to Father-Lover, well, its just that we are literally the same being spread across two forms. We are ultimately one and the same on some level or another.

So I began to mull on this. If glorifying my father ultimately ends up glorifying myself… what would glorification look like? The word “glorify” means to praise or present admirably, perhaps unjustifiably so. It is what nearly every Kemetic ritual aims to do — to beautify the NTRW in the hopes that they will remain gracious to us. It is also through this process of glorification that we ensure that the rhythmic needs of the Duat are sustained and maintained. Re needs to go into the Duat each night, he needs to push back a/pep each day, he and Osiris need to meet in order to revitalize the Duat and its residents. Just like nature, everything has a rhythm and a cycle. Part of our end of the deal is performing the rituals and doing the acts that sustain these cycles.

To consider this concept on myself, we all need a healthy attitude about ourselves. We would all lead more fulfilling and less-miserable lives if many of us weren’t constantly being self-defeating or putting ourselves down. To glorify yourself would ultimately mean to feed into your inherent regenerative nature. And so I asked myself what would help sustain me most?

I then switched back to considering the historical contexts of glorifying your father — what do akhu value most from their families? What do we often see most often for helping the akhu? And the answer I came back with was: 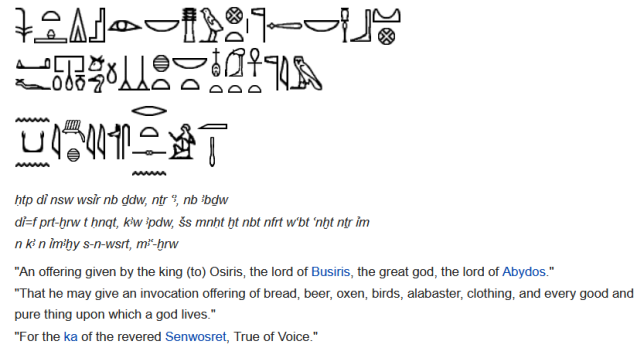 The voice offering, in my opinion, is the quintessential akhu rite out there. There are lots of people who know nothing about Kemeticism, but know about the “thousands of beer, bread, and every good thing” voice offering that was left to the akhu of the necropolis. The most important thing a son could do for his father was to offer the basic necessities of life so that his father could continue to live in the Duat. And when I think about what the best offering that you could give would be, I thought of the foreleg. The foreleg is, by far, the piece de resistance in the Opening the Mouth ceremony. Everything in the ritual crescendos when you pull out the choice cut of meat and offer all of its contained vitality to the statue/mummy.

I thought to myself, could I offer myself the foreleg instead? Could I offer it to both of us simultaneously?

One of the suggestions after my post about my eating issues interfering with being able to offer to the gods regularly was the idea of drawing foods, and offering the drawing. In response to this, I began to offer my paper foreleg amulet to the NTRW as a stand-in meal. And so the connection between the foreleg and the offering of foods went full circle, and I thought to myself “what if I offer a meal to myself every day? So that instead of doing offerings at a shrine that are couched inside of a larger ritual, the act of feeding myself becomes the ritual.” And in response, I heard “what if you did it three times per day?” (since, you know, we’re supposed to eat three meals a day.)

So I guess that means I’m eating three times per day for the Mysteries.

I admit, this is strange to me. It feels like a cop out, like I’m just using something I “already do,” and saying that it’s a good replacement for “proper rituals” at a shrine, as I have been doing all year. But to cite that post I mentioned above: I don’t really eat regularly. Or at least, I don’t eat as regularly as I should. So it’s actually quite a challenge for me, since I won’t be able to eat depression meals and call it a day. Even though it feels like a cop out, it’s going to actually be a challenge for me to do this for any length of time.

I decided I needed to check through other means to make sure that I was on the right track, and the response I got was so direct and straightforward that it was hard to deny the answer, so I guess this means I’m eating three times per day for the Mysteries. Which O dictated that it’s to be a month, as it’s always been. So I’m eating three times per day for a month. I’m sure that’ll be riddled with success.

The general idea of how this is supposed to go is that I’m to treat each meal as an event that requires my full attention. I’m to focus on myself, the food I’m eating, and try not to let myself get super distracted by the Internet, my phone, thoughts, or what have you. The meals need to have enough substance to them that they can be called meals. So for example, just eating a piece of bread and walking away is not good enough. It needs to big enough to fill me up (a challenge.)

The biggest question I am left with when it comes to doing this is the following: when we typically do rituals, there is a layer of separation involved. You offer to the gods, separate from you, and then you take the food into yourself afterwards. The path is outwards (to the gods) then inwards (when you eat it.) But what happens when you skip the outwards part? What happens when both the offering and the consuming are done in one step, at the same time, with both parties being overlapped? And is O doing this because he wants me to take care of myself, or is he wanting me to do this because of the overlap I just mentioned?

4 responses to “Eating a Mystery”