The day dawned cold and wet this new years. I got up before the sun was even up and tried to get everything together for the rites that I wanted to conduct. I had made an attempt to prep everything the night before, but it never fails that the details slip through the cracks for me anymore. Being in the center of 3 other people whose needs and schedules can change quickly, and being a disabled person whose body tends to have its own plans on any given day, it became pretty clear to me before I had even uttered the first word of my ritual that I shouldn’t expect any of the plans that I make for my Year of Rites to be too rigid or concrete, otherwise I would be running headlong into disaster and disappointment. 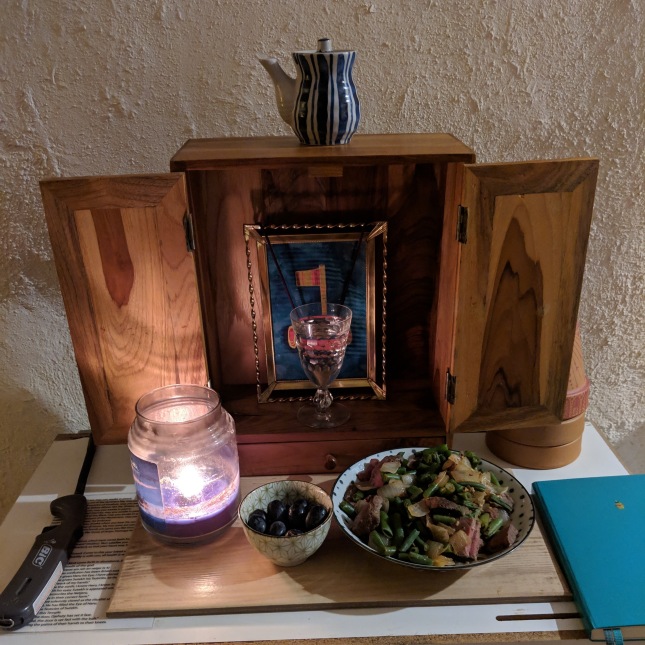 The first portion of the rite went with minimal issues, and if I could sum it up succinctly, it’d be “I said some words into a cabinet.” Both portions of the ritual I did could be summed up the same way. There is no amazing woo to tell anyone about because, honestly, nothing happened. At all. In that department.

Over the weeks that led up to this, I kept being told that this year was not about Set and Osiris. That it was about the entire pantheon, all of the NTRW, and so I decided to reconfigure the shrine for this year to reflect that. Set and O are sitting around among my other tchotchkes and I opted to make a flat image to use as an icon for this year.

I wanted the background to hearken to the Nun, a place that I often see as a place for both death and rebirth. I chose to make the symbols in red and then layer over them with gold and blue. The redness reminding me of the vitality and vibrancy that is within our gods, regardless of how hidden it might become. And I chose to put them on a symbol for gold (nebu) for reasons that I don’t really understand except that it felt Right so I did it.

While I originally had planned on doing the execration during the day and following up with part two in the afternoon, that schedule I mentioned shifted and I ended up doing the execration in the evening, as the sun set. As such, the second rite and subsequent offerings didn’t happen until well after the sun had set.

I was partway through my ritual when I remembered that I hadn’t finished my New Years Cloth offering… and so I had to make that while I left the gods to eat their offerings.

I opted to use gold marker and I chose symbols that appeared on the illustration in the book, as well as symbols that I felt would be beneficial for the NTRW in the upcoming year.

And of course, there are the four oranges.

One thing that I really noticed during this ritual was that I really am not as pensive or uptight about rituals as I used to be. While I was slightly “ugh” over the fact that certain details got missed, or that I hadn’t finished my offerings before the ritual had been started, etc. — overall, I was just as content and ready to roll with the punches and let the gods deal with it. I wasn’t as concerned with achieving a certain vibe as I had been in the past, and the total mundanity (is that a word??) of it all was quite comforting for me in a way that I didn’t entirely expect. This setup was more formal than what I’ve done in the past, and I think that additional structure helps, but overall it felt less like being under pressure to be perfect and Pious and more like “this is just a thing that I do.”

I also found myself really mulling over the fact that Zep Tepis aren’t always perfect or easily seen. I wanted to be able to time my rites with the sunrise, to allow the sun to really drive home that things were starting anew, but then the clouds covered the sun until about 9am. But when its all said and done, does it really matter? Do I really need the symbolic Zep Tepi to know that I’ve started?

It’s a lot like how most people approach New Years in general. Everyone waits for this symbolic restart, this symbolic date to decide to change themselves. And yet despite waiting for this symbolic date, most of us don’t actually see our changes through to the end of January. I wrote a long time ago about how your Zep Tepi could begin at any time, any place. That waiting for Jan 1 was not necessary, and in some cases, completely unhelpful because of the pressure it puts on you to be perfect straight out the gate.

That the best Zep Tepis pass unnoticed in the very moment when we decide to start working towards something better. That change is not one singular Big Event that causes us to change everything about ourselves. That change is made in tiny, seemingly insignificant choices that can build up to Big Events later on. That the best changes happen incrementally, not overnight when the calendar resets and the year changes.

While I was waiting for some sort of sign that symbolically signaled the changes we’re all undergoing, it became very easy to miss the very real fact that my Zep Tepi happened months ago. This Year of Rites didn’t just magically manifest overnight. I didn’t just wing my ritual. No, this has been in the works since August on some levels, since November on other levels, and since late December for the rest. Just because I didn’t have some awe-inspiring moment in shrine didn’t mean that the work hadn’t been done, or that the work didn’t matter or bear fruit.

Or as I wrote it in my log: Sometimes our Zep Tepi isn’t momentous. Sometimes it passes without notice. Its still important because any time we choose — consciously or not — to improve ourselves, we’re getting closer to ma’at, and that is the point in all of this.

May all of your Zep Tepis in 2019 be amazing — noticed or otherwise.

Posted by DevoTTR on January 2, 2019 in Kemeticism, Year of Rites