If I could sum up this year’s Wep Ronpet in a succinct phrase, it would be “the year Devo went it alone.”

When it comes to Wep Ronpet, I usually have direction or a process to inform you guys about. As I mentioned last year, Wep Ronpet is becoming less about Epagomenal days, and more about ‘burn things for Set’. Usually, he shows up in late June, and we go over at least a semblance of a plan for how I’m supposed to perform the year’s execration. He gives me an initial layout of the process I’ll follow so that I know what to write in my invitation to participate, and we discuss any general goals or things I need to accomplish before the day of the rite.

I got the default notification in mid-June about how I needed to start planning for this year’s rites. It felt very automated, like Set programmed it into his phone, and his phone shot out the reminder at it’s pre-determined time. Because of that, I couldn’t really ask him what he wanted me to do, or what I needed to do. What made this worse is that astrally, I was in a lockdown mode and couldn’t leave to go ask him (more on that in the coming weeks.) And I didn’t seem to be able to get ahold of him from this end either.

The closest thing I could get from him was confirmation (of the barest sort) that I could perform the community heka that secondgenerationimmigrant had suggested, but beyond that I was on my own.

Usually I relish in figuring out what we’re going to be doing for Wep Ronpet. I love learning about how the various concepts that I work on throughout the year with the gods will double in on itself and form new concepts and ideas for me to mull on. With each passing year, the Mysteries and Wep Ronpet execrations further my understanding of my gods and my practice. It’s during these key moments that a lot of what I’ve picked up along the way starts to make sense and become more tangibly applicable to various things.

So I was a little disappointed that I wasn’t able to come up with anything neat or cool, but at the same time, the only thing Set said to me during this years’ rites (“you’ve been working too hard”) really sums up everything that the past two years have entailed.

Most people don’t really know this, I think, but I’ve been this side of fallow since Wep Ronpet of 2014. It was during 2014’s rites that Set talked about initiation for the first time, and shortly after that, I was barred from entering the Duat, cut off from a lot of my astral life, and by the time the end of 2014 hit, my job had consumed most of my life. If you’ve been with TTR for a while, you’ve probably noticed the stark drop off in posts and writing. That is largely why.

This is further complicated by last year’s surgery, which ate up most of my memories from 2015. For example, I have a hard time remembering what I did for 2015. I vaguely remember it, but I keep confusing it with 2014’s rites. Why? Because anesthesia eats your short-term memory. I don’t really remember 2015. I remember working and being stressed and being depressed. But on the by and large, I’ve lost an entire year of my life in terms of memory.

I’m just barely coming out of this rut. Barely. Just. Not even fully out of it yet. Barely.

And as such, this year’s rites took a hit, I think, because of that. I’m currently working two jobs while trying to get my sanity back together, and I didn’t really have the time or energy to think super duper hard about what I was going to do for this year’s rites (sorry, Set). I knew I needed to do them, but I wasn’t going to exert a lot of energy figuring out how. 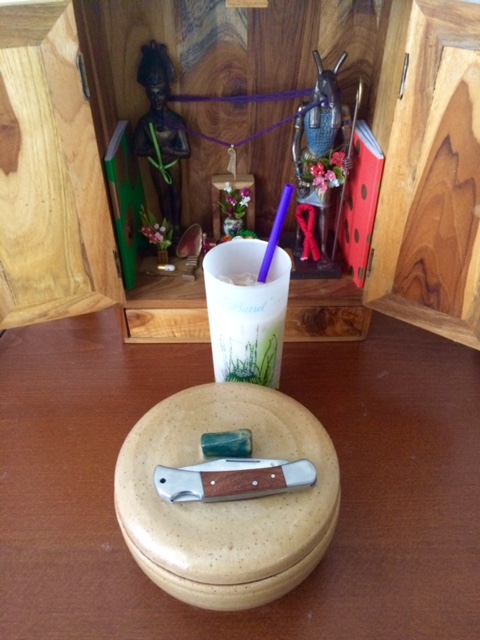 The Pot of Unrest from last year came back again this year as a holding pot for everyone’s petitions. It sat in front of the Shrine and was guarded by Set’s knife. I placed petitions into it regularly as they flowed into my inbox, and made sure to leave offerings as a means to cajole Set to come back around and check out what had been added (I don’t think it worked.)

I kept the writing structure the same as last year, where I wrote what was going to be destroyed, and then often followed it up with a positive result of having said things destroyed. But in addition to that, I decided to try adding sigils to everyone’s petitions. That way, I could send the sigil to the person as a sort of proof that their petition had been processed and added to the pot. But even more than that, it would provide a link btwn the petitioner and their petition, so that they could take an active role in the process if they wanted.

It was an attempt to help make the ritual more personalized to those who are far away. A means to invite them into the process, to play a role in their own fates and futures (since execrations can help with both) because they could use the sigil as a means to funnel energy into the petition to be destroyed, or they could perform their own execration on something marked with the same sigil, which would be an additional oomph to what I was doing. I liked the idea in concept, but in practice it was challenging. Having to have my phone charged and with me when I was processing requests was difficult. The additional steps of having to take the photo, transfer it to the computer and then email it right away so that I didn’t accidentally send the wrong sigil to the wrong person was time consuming in a way that I wasn’t fully considering when I came up with the idea. I think that maybe if I wasn’t so strapped for time, it wouldn’t have been such a problem. But given the specifics of my current situation, it might have been a poor choice for this year.

What I did learn from the process is that I can make sigils very easily, and that my astral culture (if you will) has had a heavy influence on how I draw sigils now. I also learned that there needs to be better resources for those who aren’t sure how to write execration petitions (now on my to-do list), and that wow our community has gotten so much larger than it used to be. There was more hum about Wep Ronpet this year than I’ve ever seen before. That’s awesome.

I usually set my shrine up pretty early before Wep Ronpet actually shows up. But this year, I hadn’t even fully set the ritual space up the morning of the rites. In fact, the day before the rites, I was still hemming and hawing about what I was going to offer, what I should do for the shrine setup, and what I should do for the rites themselves. I literally had not planned or prepped anything before the ritual itself (outside of the sigil on the petition thing, that’s the only pre-planning I did. Oh yeah, and fire. I knew there would be fire.)

The night before the ritual I was able to talk with Set for a very short amount of time. We went over what had been going on with the community and I gave him a status update of what needed to be addressed, what we needed to be prepping for and planning for, as well as other trends I had been noticing while out and about. I wanted to talk with him about what I needed to be doing, or what I should be planning for in terms of finishing some projects that I have put off for some time now, but he brushed me off and told me that we’d talk about it later.

The day of the rite, I slowly pulled everything together and hoped that I had gotten everything that I needed. As I sat down with my copy of Eternal Egypt, I still wasn’t sure what exactly I was going to be doing, but I trusted in my ability to pull it out of my ass like a pro.

The ritual this year was of a very different structure than normal. I noted last year that the rites felt more “big picture” than the year prior, and I feel like I expanded upon that even more so this year. I utilized the full Set rite that was in Eternal Egypt, more or less, and then placed all of the execration petitions into the execration pot while performing additional verbal heka. I then sat down and read the words that were written in the community heka, framing it as everyone’s requests to a council of NTRW, asking that they consider our words, and helping aid us in our requests. I then finished tearing up and burning the execration petitions and closed the ritual in the typical fashion as is laid out in most of the rites in Eternal Egypt. 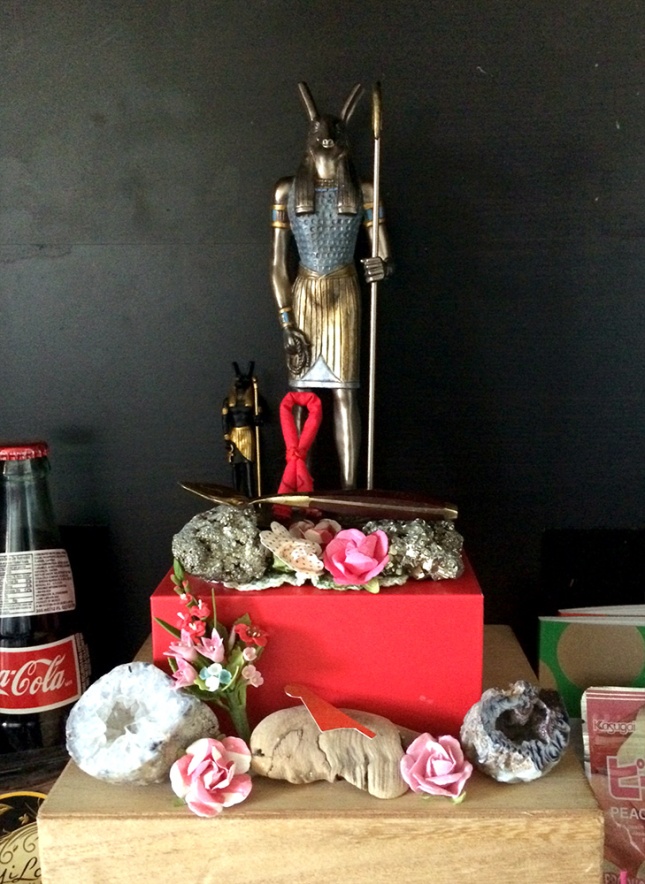 I had brought my music thinking that I’d want to use it to help with the execrations, but it wasn’t needed. This year’s ritual would count as fully formal, in my opinion, as it was very by the books and very solemn (and emotional, apparently.) While I couldn’t see or hear Set (except for the one phrase), I could feel him around. I felt like more than Set was watching, but I couldn’t tell who. In the end, I may end up making a fully formal rite the new norm as I move forward, but we’ll see how things progress in time for next year.

By the time the rites were done, I was completely exhausted in a way that is not normal for me. I’m not sure what exactly I had done that caused me to feel so absolutely drained, but it was all I could do not to lay on the floor and stare at the ceiling for the rest of the day. While the rites were not typical for me, I think that they were fulfilling, albeit in a way that is hard to describe. Even though it was the year I went it alone (and rushed and unprepared), I feel like it was successful, though I’d prefer to have more energy and time to prepare for rites in the future.

I found that even though I had more or less gone it alone, that a lot of the motifs from last year still held true for this year. Notions about how letting things go isn’t easy, and how we need to be open to the changes required in order to make our requests truly manifest. And it is my hope that everyone that sent in a petition is presented with opportunities to have their petitions fulfilled, and in ways that exceed their expectations. May we all be open to the changes that we need, so that we may succeed in the coming year.

Posted by DevoTTR on August 8, 2016 in Kemeticism

← The Evolution of Mental Illness
Side Effects of Astral Bleed-Through →