This post may not be safe for those under 18. Some images are NSFW.

I’d like to tell you a story about Santa Min.

Once upon a time, as the months got colder and colder, Santa Min looked down at the people of the world and felt sorry for them. He decided that he wanted to help them by finding a way to keep them warm! In order to facilitate this, Min decided to use what he knows best- sex!

So one night, he and a bunch of his god pals went trolling around Egypt, leaving all sorts of goodies in people’s houses.

But these weren’t the normal gifts that you’d expect to receive. Oh no! Santa Min knows what everyone really wants… Sex toys! And that’s why people love Santa Min, he doesn’t discriminate against how you behaved that year! Were you good? Here is a cock ring for you! Were you naughty? A cock ring for you as well! Santa Min knows that the secret to a happy winter is lots of love making. And he shares the love making with all of humanity of every color, preference and type you could imagine.

The morning after Santa Min has left his presents for everybody throughout all of Egypt, the people rejoice in his bringing of fertility and love to the land by setting out offerings for him, and celebrating the the most… obvious part of his person.

And as a final display of devotion, everyone helps to bring zep tepi back into the world by making some love themselves (because creation is orgasmic, after all).

And this is why many people are born in late August/early September, even to this day.

Now, as I’m sure you can tell, this is an entirely modern myth. It’s a new spin on something old, and it was created spontaneously one day when I made a comment to a fellow Kemetic that I was handing out cock rings to coworkers- like a weird Santa handing out sex toys to all the little boys and girls. They made mention that it’s something Min would do, and the story took a life of its own.

It seems to me that the modern Kemetic community lacks these modern myths. Many of us are so attached to the past that we forget that Egyptian mythology often changed and grew with society. I think it would be great if we were able to bring forth elements from the past, and make something new and fresh out of them. Take the gods and bring them to the present era.

This has been done in the myth above using a modern cultural icon- Santa. He is someone who brings good cheer and happiness to those who are good. But we’ve taken this idea and modified it to Kemetic/Egyptian standards or terms. Because Egypt had few stigmas on sex, sexuality, orientation, gender identification, etc. (as far as we know, at least) it makes sense that Min, whose primary function was protection and fertility, would bring gifts to everyone- “naughty” and nice alike.  This myth has also tried to incorporate ideas such as Zep Tepi- the first time, and connect the act of sex, celebration and fertility to the idea of things starting over, starting fresh- which is often mirrored in many winter myths (the sun being reborn, the fresh start of the New Year, etc).

I think if we are able to make the right connections to the past, it’s entirely possible to create a whole new set of myths for the modern era.

About the shrine above:

The shrine above was made with symbolism in mind, I would like to go over that symbolism here.

As you can see, Santa Min is in the back. He is the focus of this shrine. I would have liked a larger image, but it’s the closest I could find. There are items on the shrine which celebrate sex- vibrators and cock rings of various types and colors. There is bread and water- two staples in Egyptian offerings. I have added a white selenite spire- the white being related to Min already, but also for purity and the sexual connotations therein. And of course, the fact that it’s a phallic shape helps. 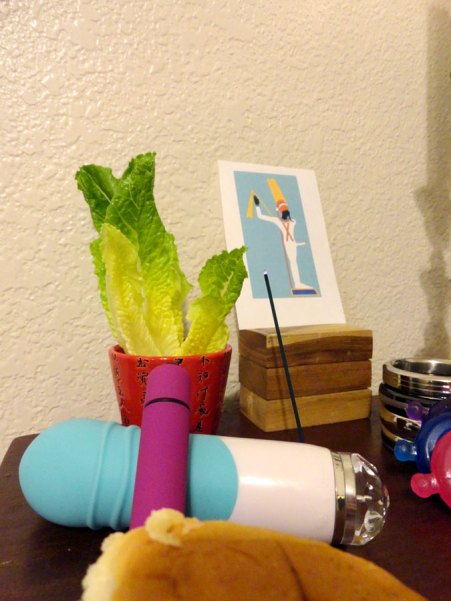 There are four leaves of lettuce- which is associated with Min and penises in Egypt in general. I chose 4 for completion of the year and the successful completed act of sex, and the joy received in so doing. I chose green incense- green for fertility. Incense for its uses in Egyptian offering standards.  And a white candle- once again, the white being used because of it’s associations with Min, and the candle itself harkening back to Zep Tepi, reminding us to bring creation in day to day life- every day.

To learn more about Min, see his page on Henadology.

What is your take on modern mythology? Do you think it has a place in modern Kemetic practice? Would you want to try your hand at creating modern myths?

Posted by DevoTTR on December 24, 2012 in Kemeticism

← The Cycle: The Pit
Know Thyself →